Set in the temperate rainforest of Southeast Alaska and the Pacific Coast, Grayling moves through the interior wilderness of a woman shaped by and inhabiting the rough country of her upbringing. These trim, lyric poems, structurally and syntactically fresh, follow a compelling narrative thread as the poet writes back into her circle a father who was both threat and savior, a sister who died too young, and herself as mother. Fish, plant life, the specific NW coastal landscape, memory, and experience weave together as Grayling straddles the faultline between past and present.

In the House on Gastineau Channel

My sister ironed her dress
on a bath towel laid over the walnut table.

Heat lifted the varnish and shaped
a milk cloud of a missing girl.

November tides flushed blue
clay and cobbles from beneath the deck,

with a retriever’s soft mouth, and she,
third from our mother’s womb.

Behind the outhouse, we nailed
siding in a Sitka spruce, a platform

big enough for a sleeping bag and book.
Above us, scolding, the red

squirrel with a turquoise tumor
like a jewel piercing its eyelid.

Listen to “In the House on Gastineau Channel,” “What Her Father Cast,” and “Sedna at the Juneau Cold Storage Dock,” read by Jenifer Browne Lawrence at Perugia Press’s 20th anniversary celebration at Smith College on November 12, 2016: 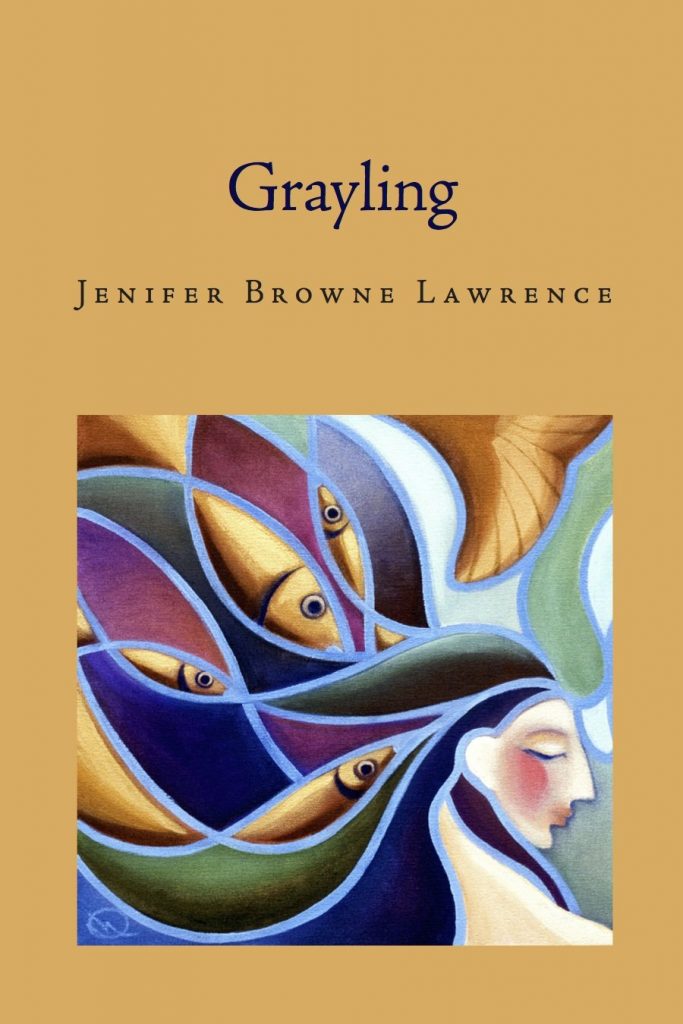 “Musical, magical, skeptical, Jenifer Browne Lawrence travels with her kit bag of poems to Juneau, Ketchikan, Mud Bay, leaving a trail of glimpses: a struggling father, a mysterious mother, lost sisters in tow. Above it all, the vast sky. Below, the glimmering Pacific with its silent schools of fish, and a woman traveling farther into the wilderness of self, with ‘no weapon but this voice.’” —Dorianne Laux

“In Grayling, poet Jenifer Browne Lawrence invites the reader to enter a world between woman and fish, a realm below the surface where being is swimming, sometimes catching, sometimes being caught. These poems both plumb the depths and trail through the water like fingers dangled from a boat.” —Joannie Stangeland, Cider Press Review

“The poems in Grayling require and reward attention, and their images echo in the reader’s mind long after the book is closed.” —Lynn Domina, Kenyon Review

“A master of presence and immediacy, Lawrence transforms the particulars of landscape into a deeply personal language in which people and place merge. The titular grayling acts as fish and symbol: of the author, the wash of sea into every surface of life, and all the routines that require a mass of small, individual lives for sustenance. The collection unfolds an intimate conversation between these elements until the landscape is as much a force as much as the people.” —Letitia Montgomery-Rodgers, The Los Angeles Review

“‘We have fallen obediently / into the cold,’ is a line from Jenifer Browne Lawrence’s new collection Grayling, in which the speaker watches a coffin being lowered into the ground. And while the line is intellectually and emotionally elegant, evoking much from this short lyric scene, it also provides a telling contrast to the consciousness guiding these poems throughout. Lawrence’s voice is pulled tight by oppositions: seeking and restless, but with a formal discipline and precision that shape and contain the poems’ appealing, subterranean energies. It’s a beautiful, thoughtfully-made book, showing this craftswoman at her finest.” —Erin Belieu

“In Jenifer Browne Lawrence’s Grayling, expect to descend slowly—into a house on the Alaska coastline, into snows, ices, tide pools, and alcohols of this particular childhood. Expect to take your time with the landscape of aimless ‘pot buoys torn loose by king tides,’ in a house with the pile of eviscerated bird and fish and crab parts on the counter. This narrator is so deeply infused with her landscape, with salmon and with tidelines, that she is often animal, herself: ‘Say I run / in a four-legged world, / say the sky is closer than ever.’ Pour yourself a cup of Karo syrup, scotch, and milk, and enjoy your metamorphoses, enjoy your transportations to this landscape—this book is gorgeous.” —Sarah Vap